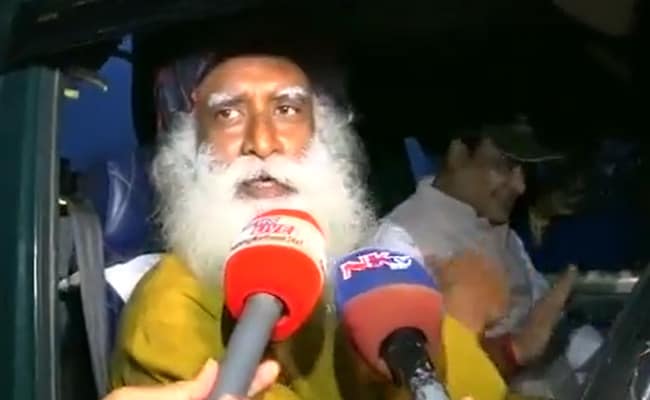 Two activists in Assam have filed a police complaint against Sadhguru, Mr Sarma and Mr Baruah alleging they entered the national park – home of the Indian one-horned rhino – much beyond the scheduled visit time on Saturday.

The activists claimed the Wildlife Protection Act, 1972, bans safari tours inside the national park after a scheduled time to protect the animals and keep their habitat relatively untouched.

“There is no violation. According to the wildlife law, the warden can give permission to enter a protected area even at night. No law stops people from entering at night. Yesterday, we had the formal opening of the park for this season and now that Sadhguru and Sri Sri Ravi Shankar had arrived, and since they have lakhs of followers, this time we expect the tourist season will be very good for Kaziranga,” Mr Sarma told reporters.

MK Yadava, Assam’s Principal Chief Conservator of Forests, said it is the forest department that invited Sadhguru and the Chief Minister. “So it is wrong to say that Sadhguru and our Chief Minister entered the park and enjoyed the safari late at night. All arrangements were made and there was no way that we could cancel the plan just because it was getting dark,” he said.

Activists Soneswar Narah and Prabin Pegu, who filed the complaint with the Golaghat district police, said action should be taken against them under the Wildlife Protection Act.

A police officer said no first information report, or FIR, has been filed, but they have started initial investigation.

“But the three were seen enjoying a safari ride inside the national park after 6 pm, violating the Wildlife Protection Act. We are living at the peripheral region of Kaziranga National Park for many years and sacrificed many things for the national park. Many of our people were killed by forest personnel and branded as poachers,” Mr Narah alleged.

“The law is equal for all. How can they violate the Wildlife Protection Act? We would not tolerate such activities. They should be arrested for violating the law,” he said.

People on social media criticised Sadhguru, Mr Sarma and Mr Baruah for driving inside the national park beyond the scheduled hours.

Sadhguru was in Assam to attend an event organised by the state government.

A response to an email sent to Sadhguru’s organisation is awaited.